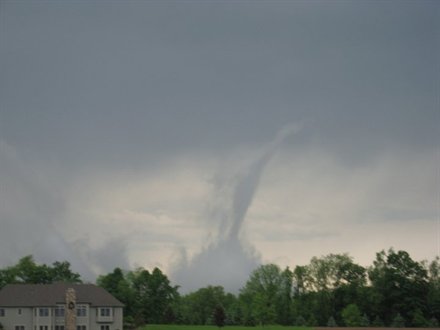 A tornado is a violently rotating column of air extending from the base of a thunderstorm down to the ground. They are capable of completely destroying well-made structures, uprooting trees, and hurling objects through the air like deadly missiles. Tornadoes can occur at any time of day or night and at any time of the year.

Tornadoes can be deadly at any rating, but can vary in size and intensity.  They are commonly rated on the EF-Scale.

Tornado alerts are issued by the National Weather Service. 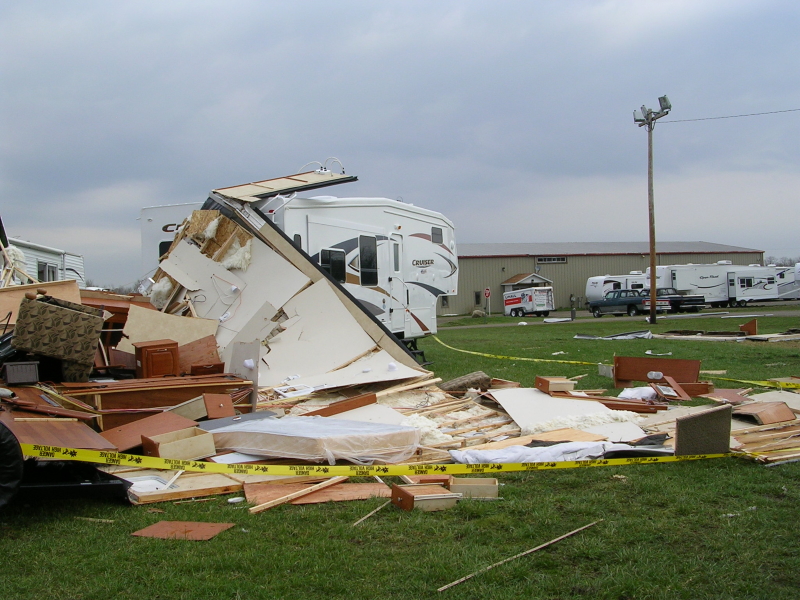 Not all severe wind damage is caused by tornadoes.  In the Kalamazoo area, most damage is caused by winds associated with a thunderstorm.  Severe thunderstorms may cause a variety of damaging winds collectively known as straight line winds, typically caused by downdrafts.  The downdrafts may last seconds or minutes, and can cause winds of up to 150 mph and inflict severe damage similar to that of a tornado.  Because of their brief nature, you may have little warning of the specific location of incoming winds.

For the purposes of mitigation and response, there is little difference between the effects of the two types of events.

Kalamazoo was struck by a F3 tornado on May 13, 1980.  The tornado's track took it across 11 miles over 20 minutes, including through the heart of the downtown area.  In its wake, it left five people dead and over $50 million dollars in damage.

Four people were killed and 146 were injured across West Michigan amidst 130 mph winds from a derecho wind event.  The storm caused $172 million in damage.

Straight line winds measuring over 80 mph and 1" hailstones caused damage across the area, flipping campers at a Schoolcraft business, knocking down trees, and destroying a grain silo in Vicksburg.

Kalamazoo sustained 55-65 mph winds as part of a severe thunderstorm that clipped trees and left almost 20,000 without power.